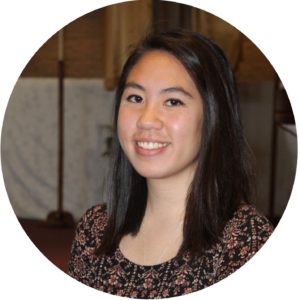 Recently, I have been reflecting on the trip to Texas that several parishioners and myself took in September to support the asylum seekers there. Five months later, there are still two big moments from that trip that continue to play in my mind.

The first was when we crossed the border into Mexico to serve dinner with Team Brownsville for the asylum seekers who were staying in the plaza. We had made 600 hotdogs, but it was not enough for everyone to have one. There was a lot of shouting and pushing as we passed out dinner because they had already known we didn’t bring enough food. There was a man who ran the repatriation center in the plaza, and he helped us organize the crowd during the dinner rush. After dinner, he gathered everyone together — asylum seekers and volunteers — to pray.

The second memory I have is what followed after we prayed together. There was a young boy, about six years old, who came to stand near us and eventually initiated a game of tag. I can remember the sound of his laughter any time we tagged him, and his wide grin any time he tagged us. As we were leaving, he ran up to me and gave me a hug.

The trip was more than just about giving donations and doing volunteer work. In reality, we had a very small rain droplet sized impact in the lives of those asylum seekers, in the lives of the volunteers who are there everyday, and in the enduring issue of immigration. But we are workers, not master builders (see the prayer: Prophets of a Future Not Our Own).

We have to trust “not on human wisdom but on the power of God” (1 Corinthians 2:5), that He puts us where we need to be His hands and feet the most. We have to trust that He puts people in our path and in our lives for a reason. On that trip, He wanted me to be there to play and to pray with His people. He wanted me to be there so we could feed them dinner and they could show me how to live joyously in the midst of suffering.

It’s easy to be swept away by all the troubles of the world, and I certainly felt helpless when I came back to Columbia after the trip. But we cannot do it all. In the first reading, the Lord says “clothe the naked when you see them” (Isaiah 58:7). He doesn’t tell us to clothe all the naked. This does not give us permission to close our eyes to those we cannot see who are suffering, but He is telling us to focus on the people right in front of us: the people He has put in our path to love. “We cannot do everything, and there is a sense of liberation in realizing that. This enables us to do something, and to do it very well.” (Prophets of a Future Not Our Own)

One light can make all the difference in the darkness. A few weeks ago, the power went out in my apartment. It was late at night, and I realized at that moment that I don’t own any battery operated sources of light (or perhaps I forgot where I had placed the flashlight). But I had a single candle. Much to my surprise, that candle filled enough of the room that I was comfortable having it as my only source of light. My power was out for about an hour, but I was not worried. That single light was enough until all the lights came back on.