The St. Thomas More Newman Center was founded in December 1963. We are a university parish of more than 800 families and over 1,000 students. Our primary apostolate is serving the collegiate campuses of the University of Missouri-Columbia, Stephen’s College, and Columbia College.  As a full parish, we also serve the full sacramental and spiritual needs of our entire community.  For directions, please click here.

A people in right relationship with God and their community.

With the help of grace, to form a Catholic community of faith who cultivates beauty, truth, goodness, communion, and justice.

The first Eucharists in Columbia were celebrated in 1831 by circuit riding priests. Sacred Heart, the first permanent parish in Columbia, was established in 1881. Catholic students and faculty worshiped together at Sacred Heart, eventually forming the Glennon Club in 1903 and the Newman Club in 1948. The Newman Club was named for John Henry Cardinal Newman. Newman was a scholar in the mid 19th century who believed that education should be moral training rather than mere instruction and that a Roman Catholic hall should be founded at Oxford University so that Catholic students would have the advantage of combining their education and their faith.

When the Jefferson City Diocese was established in 1956, plans for a new Catholic student center began in earnest. Worshipers celebrated Mass at the Newman Chapel for the first time on December 8, 1963. Built for 350 members, the building was dedicated on May 9, 1964, as the Catholic Student Center for the three college campuses in Columbia. 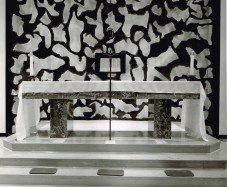 The Newman Center grew rapidly in the 1970s and membership opened to the entire Columbia community. Parishioners established many new ministries including the children’s Catholic Education Program, bible studies, and adult education. The Newman Center also developed strong social justice programs, particularly in the areas of hunger and homelessness.

In the 1980s, membership continued to soar and the facilities became desperately overcrowded. It was necessary to have seven Masses each weekend with crowded standing room conditions. Space had to be rented from the University to conduct meetings and hold religious education programs. On November 12, 1986, the first planning meeting was held to consider construction of a new church. After years of community discussion and prayerful consideration, the decision was made to proceed. 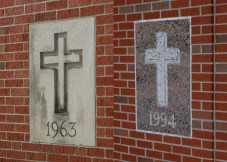 In the Spring of 1991, award-winning architectural and liturgical glass artist Elizabeth Devereaux was chosen to design and build the stained glass windows for the new worship space at St. Thomas More.  She held listening sessions with interested parishioners to gather ideas for the designs that would be reflective of the Newman Center faith community. The new church was dedicated on October 16, 1994.

The Newman Center was served by Diocesan priest from 1963-2006. In 2006, Dominicans (known as the Order of Preachers) from the Central Province took over at the Newman Center. Fr. Thomas Saucier, OP was the first Dominican Pastor. He was succeeded in July 2014 by Fr. Rich Litzau, OP. To read more about the Dominicans arriving in Columbia, read this June 24, 2006 article from the Columbia Daily Tribune.

On December 8, 2013, Newman celebrated its 50th Jubilee with a Gala at Kimball Ballroom on the Stephens College campus. There was a Mass held the next day with Bishop Gaydos presiding. On May 9, 2014, there was a special Mass to celebrate the 50th Anniversary of the Dedication of the Chapel, followed by a potluck.

The parish continues to grow in size and diversity. Each day the building is filled by members of the faith community worshipping, meeting, socializing and building the Body of Christ.