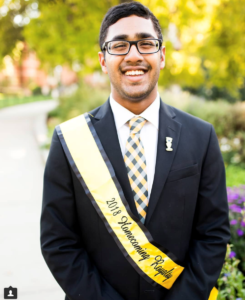 Homecoming is a tradition unlike any other, especially at the University of Missouri. It’s a chance for alumni to revisit the six columns they ran through as they graduated from the university. A chance to relive SEC football game days and see old friends. A chance to be the “ZOU” in the iconic MIZ chant at Faurot Field that unites a state and ignites thousands. No matter what direction on I-70 you come from, there is always a path that leads back to the heart of the Show Me State: Columbia, Missouri.

For students, Homecoming is the ultimate form of showcasing pride for the university and proudly representing your Greek letters or organizations. With one of the largest blood drives in the country, lives are being changed. Through talent shows, we get to see what more students have to offer outside the classroom. A day of service, the annual 5k run, and a gigantic canned food drive headline opportunities to give back to the community.

For me, a senior from the suburbs of Chicago, it means celebrating the University that has become my home. To take a page out of Barry Odom’s book: “The University of Missouri is my home. I care more about this place than anything in the world.” The tradition that is so deeply rooted at Mizzou and the pride the Mizzou community has for the school was a huge factor in what drove me to enroll here.

My freshman year, my friend Cam and I stayed up through the entire night playing a football game on the Playstation the night before the Homecoming game. In the morning, we brought sleeping bags and camped outside Faurot to be one of the first 60 students in the stadium so that we could be in the front row and paint our chests. We ended up getting smoked by the Florida Gators, but it was quite the experience for my first college homecoming.

Now in my final year, I’ve had the privilege of representing the Catholic Student Association as a Top 10 member of Mizzou Homecoming Royalty. I’m beyond honored to play a part in such a famous tradition with nine other incredible Tigers. To be immersed even further in the culture of the school I love is more than I could have asked for.

The Catholic Student Association, and more specifically the Newman Center, has been my home on campus. I’ve gotten involved with a Bible study, attended E3 worship nights, and helped out on many retreats. Through those, I’ve met some of the greatest people I’ve ever known, including my two roommates. Once I began leading a Bible study last year, my spiritual growth increased immensely, and some of those now-sophomore guys became my best friends. I spend time at the Newman Center studying, relaxing, praying, laughing, crying, eating and more, and the people I’ve met make it even more like home.

With about seven months left until I graduate from Mizzou, I can’t help but think about the views of the columns that I’ll miss or the late night Addison’s runs with people from Newman. That said, it also gives me so much joy to think about the day I get to return as an alum of the University of Missouri.

To the alumni of the St. Thomas More Newman Center and the University of Missouri, welcome home. Go Tigers!