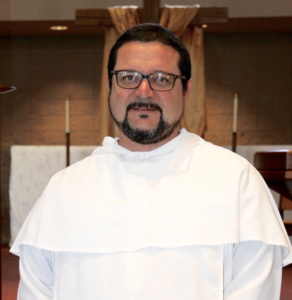 A few weeks ago, I was asked if I could come to St. Brendan’s in Mexico, Missouri, for their monthly Extraordinary Form (traditional Latin) Mass. I was excited about the idea of celebrating it (the Dominican version) publicly, as I usually only do so in our home chapel. As it turned out, however, they were not asking me to celebrate the Mass but to lead the Schola. That is, they were asking if I could gather some singers, teach them, and lead them in the Gregorian Chants proper to that day’s Mass. I was nervous about it because, though I have sung Chant a lot over the years, I’m not at all qualified to lead a Schola. I agreed, however, because there was nobody else to do it and because it was one of my few chances these days to be involved in Chant again. That’s why, if you passed by my office over the last couple weeks, you may have seen me with my earbuds in, staring at YouTube videos of the Gregorian Chants for the 4th Sunday after the Epiphany. Modern technology is not all bad!

Gregorian Chant was one of the things that first attracted me to the Catholic Church, way back in my freshman year in college. The whole experience of attending Mass for the first time was like stepping into another world, and the Chant was a big part of that experience. It is unlike any popular music you hear today. (You might look up the Missa Orbis Factor, for example, on YouTube or Spotify. A recording doesn’t have the same effect as hearing it in church, of course, but it will give you some idea of what I mean.) I was so fascinated by it that I joined my college’s Schola even before I became a Catholic and began to learn about the history and spirituality of this ancient form of sacred music.

Although it is named for Pope Saint Gregory the Great (590-604), its origins actually go all the way back to the singing of the Psalms in ancient Jewish worship, and it developed over the years so that the Chants are the result of many centuries of the Church’s devotion and prayer over the sacred texts. The ancient origins of the melodies and the lack of a regular beat give the Chant a mysterious and timeless quality that is particularly fitting for worship. That is why the Second Vatican Council says, “The Church acknowledges Gregorian chant as specially suited to the Roman liturgy: therefore, other things being equal, it should be given pride of place in liturgical services” (Sacrosanctum concilium 116). There have been efforts in recent years to put some of the Chants into English, but on this Sunday we would be using the traditional Latin Chants.

With such a venerable heritage, you can see why I was worried about whether I could do justice to the tradition of Chant. Thankfully, a group of students were enthusiastic about learning the Chants and joining me in the singing. We got together three times to practice, and then off we went to Mexico. Still nervous, I tried to forget about everything except what my Schola Master used to emphasize — praying the sacred text with the greatest possible devotion is the heart of Gregorian Chant. The organ played. Then there was silence. Then the bell rang for the entrance, and we began, Adorate Deum, omnes angeli eius! (Adore God, all his angels!) There were a few rough spots, of course, but it went well for the most part. Nothing we can do is ever worthy of God, but He blesses our good-hearted efforts. I will always be grateful for my exposure to Gregorian Chant all those years ago, for any opportunity to pray with it, and to the guys who chanted with me.