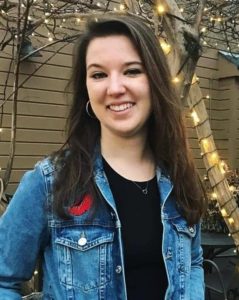 Xernona Clayton’s office suite is packed from floor to ceiling with colorful artwork, and her conference room offers a stellar view of the Atlanta skyline. But we weren’t there to see the sights. We were there to learn. The Newman Center’s spring break pilgrimage was a series of learning experiences as we drove throughout the South visiting important sites from the Civil Rights Movement.

Mrs. Clayton’s name isn’t one I ever read in a history textbook, but it should have been. She was the mind behind the International Civil Rights Walk of Fame. She was active in the movement and knew Dr. Martin Luther King, Jr. before he became a national icon. She once had dinner with a grand dragon of the Ku Klux Klan and convinced him to change his views and denounce white nationalism. She is 88 years old and still a social justice advocate. A role model, and also a distant relative of our own Yvonne Chamberlain.

Like Mrs. Clayton, there are tons of participants in the Civil Rights Movement who aren’t household names. But their names and actions are preserved and commemorated at the National Civil Rights Museum in Memphis, built into the Lorraine Motel, the exact place where King was shot and killed. The museum goes into great detail about the myriad efforts, milestones, and baby steps on the long road to desegregation. It also lays out the long and ugly history of slavery that laid the foundation for segregation and the continued injustices African Americans face today.

Another thing I think most Americans don’t realize is that the Civil Rights Movement wasn’t confined to the South because neither is institutionalized racism. There’s a wall-sized touch screen in the museum with a map of events that mattered to the movement, and the North wasn’t immune: California, Chicago, New England, and even Wyoming saw discrimination and the response of protest. 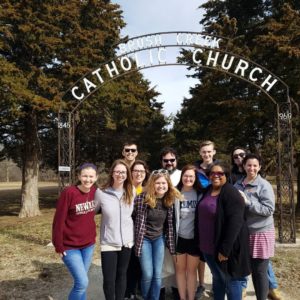 The Legacy Museum in Montgomery, Alabama, part of the Equal Justice Initiative, further illustrated how deeply ingrained racism is in this country. The museum’s theme, “From Enslavement to Mass Incarceration,” includes newspaper ads of slaves for sale and the exact texts of segregationist laws. Montgomery was basically the capital of the slave trade, and the museum building was once a warehouse where slaves were kept. The other part of EJI is the National Memorial for Peace and Justice, a moving tribute to victims of slavery, lynchings, segregation, Jim Crow laws, and police violence. The outdoor exhibit is a mass of hanging pillars with lists of names and dates from each county and state where black Americans were lynched. The indoor exhibit includes jars of soil from each lynching location in Alabama alone — and there was a lot of soil.

Our trip was under the patronage of Father Augustus Tolton, the first known African American priest and the namesake of our local Catholic high school. Before we drove south, we visited St. Peter’s Brush Creek Catholic Church, where Tolton was born into slavery and baptized, northeast of Columbia and not far from Hannibal. Tolton’s family escaped slavery, and he grew up in Quincy, Illinois, where we visited his grave.

We were reminded of our nation’s brutal history everywhere we went, including Selma, Alabama, where we walked across the Edmund Pettus Bridge, the site of the Bloody Sunday attack on civil rights advocates as they marched to Montgomery in 1965. But we were also reminded of the undying perseverance and faith of those who fought for justice and refused to bow to resistance and mistreatment.

Outside the 16th Street Baptist Church in Birmingham, the church where four black girls were killed in a racist bombing in 1963, a homeless African-American man taught us and other visitors the church’s history before and after the bombing. He said he lives on cash donations from those who listen to him. People of color are still economically disadvantaged in this country, and wisdom doesn’t pay the bills. There is still so much to be done to ensure that all Americans, all human beings, are treated according to the dignity God gave them.

I signed up for the trip partly because I wanted what we set out to learn about social justice to inform my reporting. As a journalist, it’s crucial for me to avoid expressing political views on social media, or even in face-to-face interactions, lest I be seen as biased. I’ve often felt stuck in how I’m supposed to present myself because staying silent about social justice issues perpetuates them, but speaking out about those issues tends to be perceived as politically liberal. On the other hand, Christianity usually falls on the conservative side of the spectrum, so I’m sure most of my Twitter followers don’t even know I’m Catholic. At the end of the trip, I decided I need to find the language to be open about my faith and about social justice without risking my credibility. This is something I pray about regularly now.

I initially felt a little out of place on the trip because almost everyone else is more involved at Newman than I’ve been for the past couple years. But through group prayer and reflection, as well as just having fun, I soon felt at home. We celebrated Mass every day, and each time I remembered what we were supposed to be learning on the trip in the first place: we are all created with equal dignity in God’s image. I’m grateful that God called me to participate in Newman’s spring break pilgrimage, and I encourage my fellow Newman students to look into their hearts and listen to how God might be calling them closer to Him and others.